CHILDHOOD AND STUDIES IN ROME (1914-1939) Achilina di Enrico Bo Bardi – Lina Bo Bardi – was born on December 5th 1914, in Prati di Castello, Rome. Daughter of Giovanna Adriana Grazia and Enrico Bo, and older sister of Graziela Bo, Lina displayed a talent for the arts from an early age. Her father – engineer, builder and painter – taught her drawing, an activity that they then began to practice together since Lina was 10 years old; she painted with gouache and watercolor, with the same appreciation for details as his father. Her academic education was entirely based in Rome. In 1933, she graduated from the Liceo Artistico and, between the period of 1934 and 1939, she was one of the few women to attend the Facoltá di Architettura of the Università degli Studi di Roma....Read more

CHILDHOOD AND STUDIES IN ROME (1914-1939) Achilina di Enrico Bo Bardi – Lina Bo Bardi – was born on December 5th 1914, in Prati di Castello, Rome. Daughter of Giovanna Adriana Grazia and Enrico Bo, and older sister of Graziela Bo, Lina displayed a talent for the arts from an early age. Her father – engineer, builder and painter – taught her drawing, an activity that they then began to practice together since Lina was 10 years old; she painted with gouache and watercolor, with the same appreciation for details as his father. Her academic education was entirely based in Rome. In 1933, she graduated from the Liceo Artistico and, between the period of 1934 and 1939, she was one of the few women to attend the Facoltá di Architettura of the Università degli Studi di Roma. At the age of 25, she graduated as an architect, presenting the work entitled “Assistance Center for Maternity and Childhood”, a project with a reinforced concrete structure and exposed glass, a language that showed some innovation compared to the school’s official architectural style.

PROFESSIONAL EXPERIENCES IN MILAN (1940-1946) In 1940, during World War II, Lina moved to Milan and teamed up with the architect Carlo Pagani, with whom she founded the Bo e Pagani studio and with whom she collaborated in projects for Gio Ponti’s office. She developed a series of articles for Italian periodicals, both with individual and shared authorship, and contributed to the editing and illustration of several magazines, such as Lo Stile – nella casa e nell’arrendamento, Grazia, Belleza, Vetrina and L’Ilustrazionoe Italiana. In 1944 she was invited to co-direct the magazine Domus and in 1945, again with Pagani, she founded and directed Quaderni di Domus. In the same year, they created, in collaboration with Raffaele Carrieri and Bruno Zevi, the magazine A – Cultura della Vita, as a synthesis of “Attualità, Architettura, Abitazione, Arte”, dedicated to shedding light on the problems of reconstruction to a non-specialized public, and concerned with approaching the themes of everyday life from the awareness of the psychological reality of the post-war period. With the end of the war, Lina briefly returned to Rome and, on a visit to the Studio d’ Arte Palma, she met Pietro Maria Bardi, who she married in 1946.

ARRIVAL IN BRAZIL AND THE FIRST YEARS IN SÃO PAULO (1946-1957) In 1946, the newlyweds Lina and Pietro Maria embarked on the adventure of coming to Brazil, a country with the prospect of prosperity in the field of arts and a promising architecture scenario. They left Genoa aboard the freighter Almirante Jaceguay, and disembarked, in October of the same year, in Rio de Janeiro, where they remained for the first few months. Newly arrived, Pietro was invited by the journalist, politician, and politician Assis Chateaubriand to found and direct the Museu de Arte de São Paulo (MASP). The couple moved to São Paulo and already in 1947 carried out the first installations of the Museum, temporarily located at Rua 7 de Abril. In 1948, Lina created, in partnership with Pietro Maria Bardi, the architect Giancarlo Palanti and Valeria Piacentini Cirell, the Estúdio de Arte Palma, dedicated to design of modern and industrial furniture. In 1950, she founded and directed with Pietro Maria Bardi the magazine Habitat, officially associated with the recently founded MASP, and which defined itself as the “magazine of the arts of Brazil”. In 1951, the year she became a Brazilian citizen, Lina completed her first built architectural project: the Glass House, residence of the Bardi couple – it was the first house built in the Morumbi neighborhood, located in one of the most elevated areas of the neighborhood and immersed in the dense vegetation of the Atlantic Rainforest. Also in 1951, she founded and directed, with Pietro Maria Bardi, the Instituto de Arte Contemporânea, one of the first design teaching initiatives in Brazil, also linked to MASP. Between 1955 and 1956, Lina was a professor of Architectural Theory at the Faculty of Architecture and Urbanism at the Universidade de São Paulo as a temporary replacement for another professor  – her first teaching experience. During this time she wrote the thesis Propedeutic Contribution to the Teaching of Architectural Theory for an admission process that was eventually cancelled. In 1957, she carried out the first studies for the new headquarters of the Museu de Arte de São Paulo at Avenida Paulista.

THE YEARS IN SALVADOR (1958-1964) In 1958, Lina went to Salvador to give lectures at the Escola de Belas Artes da Universidade da Bahia and moved there in the same year, after being invited to found and direct the Museu de Arte Moderna da Bahia (MAM-BA). She carried out the restoration project for Solar do Unhão and its adaptation to the new headquarters of the newly opened museum. In 1959, she organized with Martim Gonçalves – with whom she created several scenographies for plays – the exhibition Bahia no Ibirapuera at the V Bienal de Arte de São Paulo. In 1963, she was responsible for the curatorship of the Nordeste exhibition, the first held after the opening of Museu de Arte Moderna da Bahia. During this period Lina became acquainted with important avant-garde artists such as photographer Pierre Verger and filmmaker Glauber Rocha. She left Salvador and returned to São Paulo in 1964, the year of the military coup.

THE RETURN TO SÃO PAULO AND THE RESUMPTION OF THE MASP PROJECT (1964-1968) In 1965, Lina Bo Bardi carried out studies for three unbuilt projects: a museum for the Instituto Butantã in São Paulo, an exhibition pavilion in Parque Lage in Rio de Janeiro, and one of her rare urbanization studies – a design for Itamambuca beach in Ubatuba. In 1966, she resumed the project for the Museu de Arte de São Paulo (MASP), developing adaptations and details, in addition to following up on the construction site. The museum was inaugurated on Avenida Paulista, in 1968, with the exhibition A mão do povo brasileiro. In 1967, she designed the graphic project of the recently launched magazine Mirante das Artes, edited by Pietro Maria Bardi.

IMMERSION IN THE THEATER SCENE (1969-1976) The nine years that followed – which coincided with the years of the military dictatorship – were a period in which Lina dedicated herself mostly to scenography, in contact with important names in the theatrical and cinematographic scene of the moment, such as José Celso Martinez Correia and Flávio Império. In 1969, she began her partnership with Zé Celso, working on the scenic architecture and costumes for the play Na Selva das Cidades. With the same director and with André Farias, in 1970, she also created the scenography for the film Prata Palomares. In 1971, she collaborated in the film Gracias Señor by Flávio Império. In 1975 Lina set up with the painter Edmar José de Almeida in the exhibition Repassos, at MASP, about the work of weavers of the Triângulo Mineiro.

LAST CAREER PHASE, MAJOR PROJECTS (1977-1992) In 1977, she returned to the architectural scene with the beginning of the project for the SESC Pompéia leisure center, which was inaugurated in 1982. In this phase, she consolidated the beginning of the partnership with her young collaborators Marcelo Ferraz, André Vainer, and Marcelo Suzuki. In the same year, she carried out new installations for the Museu de Arte Moderna at Parque Ibirapuera and, in 1984, she began to sketch the first drawings for the redesign of the Teatro Oficina headquarters, both in São Paulo. In 1986, she was invited by the City of Salvador to develop a restoration project for its historic center. On that same occasion, she carried out other projects for the city, such as the Teatro e Fundação Gregório de Mattos, the Casa do Benin (in Pelourinho), the recovery of the slopes of the Misericórdia hillside and the Casa do Olodum. In 1990, she began the restoration of the Teatro Oficina building (inaugurated in 1994) and the design for the new headquarters of the Palácio das Indústrias for the City of São Paulo, which was her last project. Also in 1990, Lina and Pietro Maria founded the Instituto Quadrante – now Instituto Bardi/Casa de Vidro – with the aim of “developing independently or together with the Museu de Arte de São Paulo – Assis Chateaubriand – MASP, and also with national and foreign entities, cultural activities and studies related to the history of art and architecture” – she was in charge of the vice-presidency of the institute from its foundation until her last year of life.

She died in São Paulo, on March 20th, 1992, at the age of 77, having become an international reference for her trajectory and the exceptionality of her works. 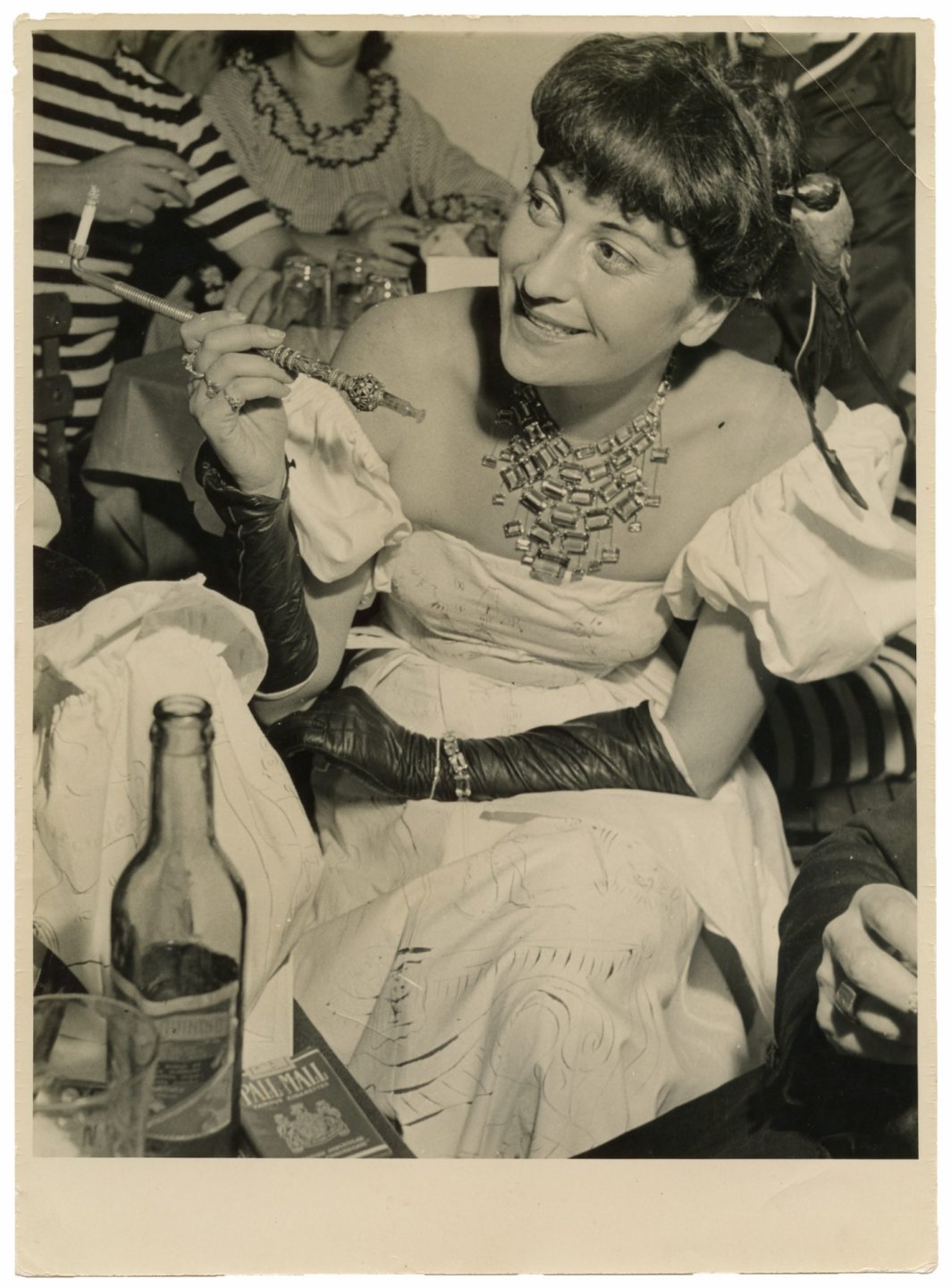 Lina Bo Bardi at Carnival at the IAB with a seawater necklace designed by her. São Paulo 1948. Photo by Henri Ballot. Courtesy Instituto Bardi.